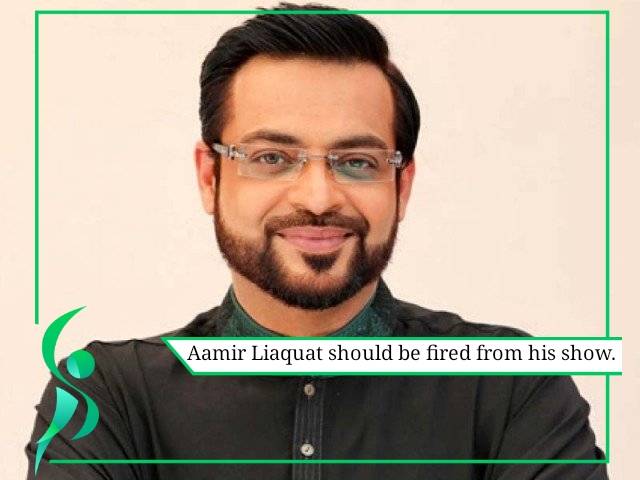 Shock jock host, televangelist, or politician – whatever you may call him, Aamir Liaquat Hussain and controversy go hand in hand. While there’s no denying that he’s a skilled orator, Aamir Liaquat simply cannot let go of his knack for wheedling his guests in a manner that makes one wonder if there’s something more sinister lurking beyond the façade of his perpetual toothy grin.

Three weeks into the holy month, and you would expect that the former Aalim Online host would have learned from the missteps that Galaxy Lollywood and other press outlets have pointed out, time and again. However, what has transpired on his show Jeevay Ramzan so far indicates that there is possibly some method to this madness, with perhaps controversy being on agenda for gaining attention and ratings during a cut-throat primetime slot? Or, maybe, that’s just the doctor’s modus operandi by default?

Either way, if we were to make a blooper reel of awkward moments on his show, we wouldn’t know where to start, and where to finish.

It all came to our notice with the much talked about ‘insensitive’ remarks Aamir Liaquat made when Adnan Siddiqui was his celebrity guest. The bewhiskered host created quite a hoopla when he told Adnan that his two main co-stars in Bollywood films were both dead and that actresses of films the Meray Paas Tum Ho star rejected or didn’t end up doing owed their life to him. Adnan Siddiqui later formally apologized to the families of both the actors.

Later, Ali Rehman Khan had to sit through a cloyingly sweet introduction that was marked by cultural faux-passes again and left us amazed. We were not sure if Aamir Liaquat was being sarcastic, satirical, or genuinely nice, but the whole affair was punctuated by innumerable references to actor’s ethnicity (Ali Rehman Khan is from Islamabad, hailing from a Pashto-speaking background). And let’s just say, as the on-and-off televangelist kept on bringing “Aap Pathaan hain” into the conversation with an ever more pronounced (sinister?) grin, our irony detectors automatically went into overdrive.

The women who had to face it all

Kudos to Ali though, for taking it all in his stride. The good doctor though only kept the fun going in his later shows. When former Lollywood-era star Reema Khan turned up as his star guest, he turned to his usual killing-with-kindness routine by showering the actress with his grandiose introduction and massive grins and tributes.

The show has even seen what we thought were rather creepy moments. Hira Mani, appearing on the game-show all decked in her signature overflowing sari had barely taken the hot-seat when Liaquat decided to push the phrase “Mere pass tum ho, Mujhe yakeen nahi araha” on the actress repetitively even when she had, clearly uncomfortable, brushed it off with a “Mujhe tau yeh Saari Dunya kehti hai ab.” The top two comments on the YouTube version of the show, posted on Aamir Liaquat’s own channel, include “Mark my words he is mentally ill” and “Looks like he on drugs.”

It seems like there’s no shortage of what we have perceived to be awkward moments that can discuss here. For now, though, we’ll just conclude the discussion hoping this so-sweet-it’s-bitter, the innuendo-laden style will have been noticed and pointed out by the stars in question, and that they will take a lead in ending any awkwardness in a straightforward candid way in the future. May better sense prevail.