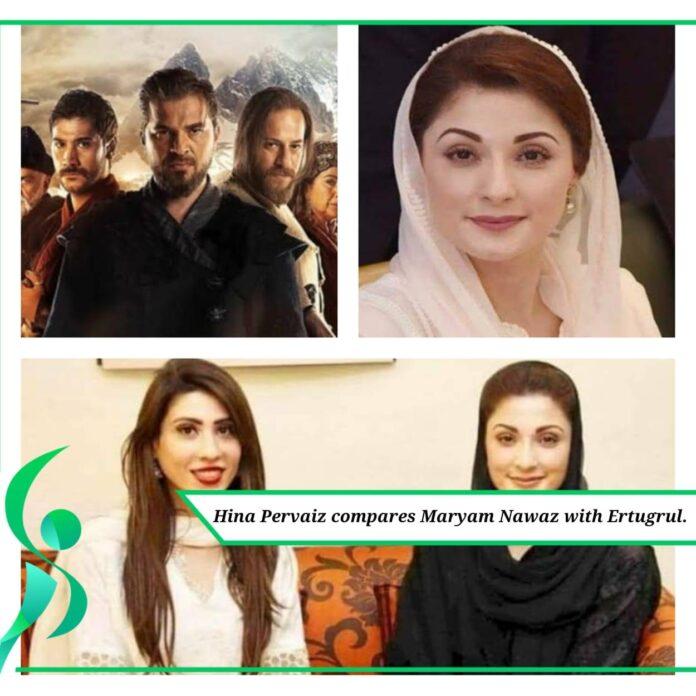 Hina Pervaiz Butt compares her leader Maryam Nawaz with a popular hero of the Turkish series, Ertugrul, and the internet is not agreed with it.
Ever since the Turkish serial has been released on PTV, many politicians and celebrities took their social media accounts expressing their opinion over it. This time MPA of Muslim League-N Hina Pervaiz Butt was in the limelight but for all the wrong reasons.
The MPA took her twitter account and went ahead to say :
I am watching Ertugrul these days and I see Maryam Nawaz has related leadership qualities as Ertugrul,” she wrote on Twitter. “Her strong faith in Almighty, her courage to not give up, her conviction to stand on her principles even when everyone is against her, her ability to differentiate between right and wrong.”

But wait, people were not ready for it :

Some even dragged Marvi Sarmad into this :

People went ahead to recommend her a new show .

Some even asked a question about the other members of the family.

But most importantly, people thought her education was a waste of time and money.

People also went ahead to remind her about the release of Indian serials, back in the day. This serial was released on PM Imran Khans request and became a hit in a day.

People also have a opinion about her courage, which we also think must be applauded.

People were quick to judge her intention too which according to them she achieved too.

Also there is a debate if she is really watching Ertugrul or not ?

People are also having pity over her sense and wish to see her personality rather than following her leaders. Moreover, everyone wants that she should be known for his work and nothing else.

Well we also think that MPA Hina Pervaiz Butt was quite senseless, what do you think ?