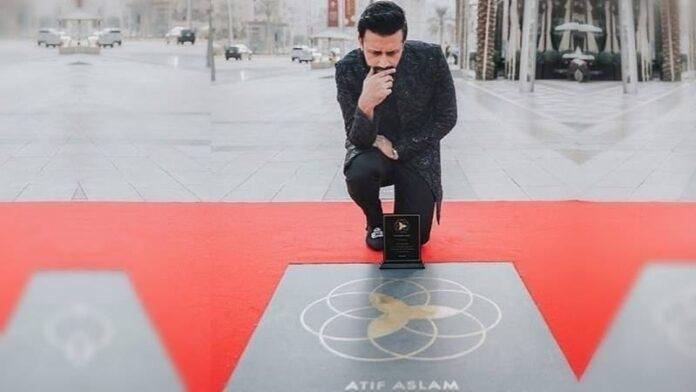 The living legend Atif Aslam got his very own star at Dubai Walk of Fame. Where 400 artists nominated from the realms of sports arts, music, film, literature and influencers from social media all around the globe and gather to recognize exceptional artistry. Atif Aslam being one of the finest singer of Pakistan received this honour on Sunday at the ceremony. His vocal perfection and chorus matching is remarkable. Not only in his motherland, his brilliance renowned in neighbouring country India. In Dubai a number of concerts rocked with the voice of Aslam and he never fails in giving proud moments to his fans and Pakistan.

The opening ceremony acknowledge the singer’s achievement and mention the honorary award by the government of Pakistan “Tamgha-e-Imtiaz” for his enormous talent. In the conference Aslam mentioned his gratefulness for being there, he said “ it’s a vibrant city where I enjoy myself walking on the streets. Here, I played for 150,000 people, so it has a lot of good will” he added that he love the fact that his music is heard over there. When giving the answer of a question about his views behind the reason of being awarded here?” he concluded “music is cross cultural, always connecting people with each other. I started in Pakistan then went to India and now on gone globe”.

On his journey, his aim was to collaborated with other celebrities to more expertise the music and to know beautiful enlightenments of different cultures. The people of Pakistan wish him more success in his field.