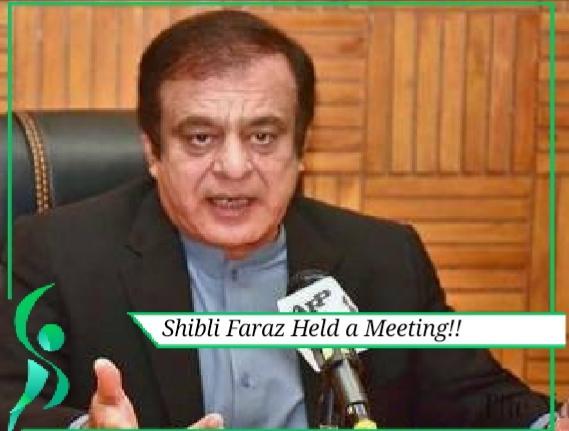 Federal Minister for Information and Broadcasting Shibli Faraz said that a film task force would be set up as soon as possible to protect the rights of artists, which would include government officials and members of the film industry.

Government Minister for Information and Broadcasting Senator Shibli Faraz Monday said artists were assets of the country who assumed a significant role in the advancement of national culture and image.

The video link meeting chaired by the Federal Minister for Information with artists and other stakeholders discussed the problems facing the film industry and their solutions.

Talking to the participants, Shibli Faraz assured that a film task force would be set up as soon as possible to promote the industry. Humayun Saeed, Wasay Chaudhry, Fiza Ali Mirza, Ali Zafar, Khawaja Najam ul Hassan, and Nadeem Mandviwala participated in the video conference.

Shibli Faraz termed the royalty of the work as the right of the artists and said that practical steps would be taken to ensure the protection of copyrights.

Chairman of Central Film Censor Board, Daniyal Gilani shared the details and photos on Twitter. Shibli Faraz stressed that artists have the right to take royalties for their work and practical steps should be taken to ensure the safety of their work. “Our artists are our identity and national asset and they play a key role in promoting national culture and identity,” he added.

He also said that the encouragement of creative thinking is essential for the development of society. Information and Broadcasting Secretary Akbar Durrani while briefing the audience about the National Film Policy and Artist Welfare Fund said that a database of artists across the country. Is being compiled from, which will help them in providing financial support by making film task force.