Home Celebrities Hamza Ali Abbasi Is Back On Television Screens 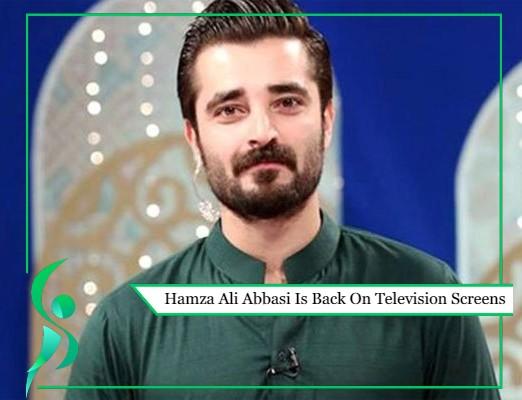 Hamza Ali Abbasi is one of the most famous and iconic actors of the Pakistan showbiz industry. He was admired for his super hit roles as Afzal and Salahuddin. He always inspires the audience with his remarkable performance in his drama serials. Earlier, he took a very long break from showbiz for about a year. His last project was Alif later then he wasn’t seen in showbiz for a while. In the past year, Hamza Ali Abbasi shared with the media that he is going to say goodbye to the Pakistan showbiz industry and he will no more be working as an actor furthermore he plight to spend the journey of his life by doing services for Islam.

Latterly, Hamza Ali was invited to an online game show named as Kasoti Online with Ahmed Ali Butt on Express Entertainment. He was asked by Ahmed Ali if he is leaving the showbiz industry or not. Hamza answered that I am not leaving the showbiz utterly. Humayun Saeed shared that he is going to be co-actor with Hamza Ali Abbasi in his upcoming project and it is going to be a super hit one. Although, Hamza was likely to be an Islamic scholar and he had started to even study in-depth about Islamic studies.

Subsequently, Hamza Ali Abbasi is going to perform characters that are indulged and based on nationalism and spiritism says, Humayun Saeed. In an interview, Hamza concluded his fans and audience that he will be pursuing the rest of his life according to the principles of Islam.

Hamza Ali Abbasi also shared his views about practicing Islam in his life in the video. When questions were raised to him. He answered them putting off his views. “I begin to examine all different religions and culture which exist today in our world. To find out the most asked question Who created our world? Then I analyzed the religion of Islam which truly gave me the answer to this question and then I diverse myself from atheism to Islam.” He said. He also said that “Following the journey of 12 years in showbiz industry I have perceived that this life is only materialistic and the real journey begins after death “

But the paparazzi has predicted that Hamza Ali Abbasi is presently working on two projects and which is going to be his comeback in the showbiz industry. Hamza also has concluded that his on-going projects and further projects in the future will be based on Islam.

Share your views in the comment section below and stay Tuned to Showbiz Pakistan for latest news and updates.