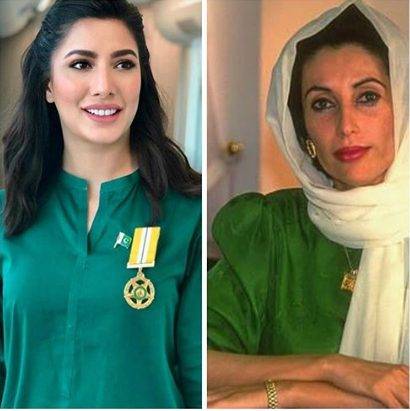 Rumors had it that Mehwish Hayat would be portraying the role of Benazir Bhutto in biopic when she shared a photo of her on Instagram reading a book related to Bhutto’s life in 2018.

And finally during her recent interview with BBC Urdu, Mehwish Hayat confirmed that she will be playing the part of the late Mohtarma Benazir Bhutto in an upcoming biopic.

In a recent interview with BBC Urdu, Hayat said that if her speaking the truth and highlighting how Pakistanis were portrayed in a negative light by Bollywood and Hollywood movies meant that Indian filmmakers won’t cast her in their films, then she’d rather have that.

“I’d rather speak the truth and not get cast in their films,” she said. “This is not something that I’ve said right now. I’ve been saying this all along. Maybe because of the current crisis, this has amplified so much. This has been my stance since day one,” she added.

Mehwish even asked the film makers that were portraying Pakistanis in a negative stereotype to come to the country and witness from their eyes what actually Pakistan is.

“Come and see for yourselves what a peaceful country and what a peace-loving nation we are,” she said. “We are famous for our hospitality around the world.”

She also talk about her upcoming character essaying Benazir Bhutto in an upcoming biopic. Mehwish showered praises on the first woman prime minister of Pakistan and said that she loved Benazir.

“I love Benazir Bhutto,” she said. “She was the first woman prime minister of Pakistan. That’s such a great thing. People need to see and know more about Benazir,” she added.

“Things are written in books and people do read them. But the film is another medium altogether,” she said. “Our generation needs to know more about Benazir.”

The Tamgha-e-imtiaz actress also said that she was reading up about Benazir to gear up to play the role. “The more I read about her, the more I am inspired but I also get sad. We lost a great leader,” she said.

Want to add more to the story? comment below