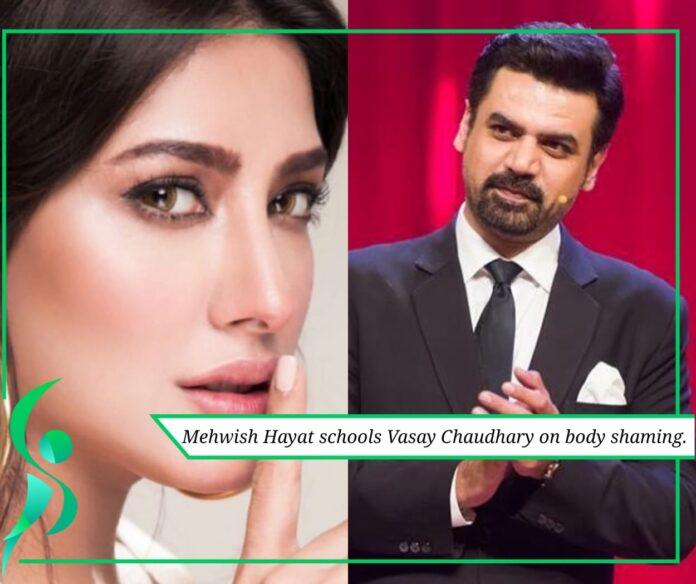 Recently, Mehwish Hayat made an appearance on Vasay Chaudhary’s show, ‘Ghabrana Mana Hai’, and the actor schools the host on body shaming.

You may or may not know about Vasay Chaudhary’s chat show ‘Ghabrana Mana Hai,’ where he holds an informal conversation with the guest. In the latest episode, singer and actor Mehwish Hayat made an appearance and shared her views related to happenings in the industry and her upcoming projects.

Following the conversation, the host asked her about Pakistani actors who could step in Ertugral shows to which the actor replied ‘Ahmed Ali Butt’. The Actor in Law actress named Ahmed Ali Butt, which was apparently funny to the host, and the conversation went on like this:

Vasay, after stopping her from mid-sentence said,’ Please, now stopover here. Ahmed Ali Butt on a horse? And that horse has to run too? To which the actor replied,’ Haven’t you seen him now? He’s fit’. As soon as Vasay tried to say something again, the actor stopped her and schooled him on body shaming.

Hayat said,’ stop talking to me about any body-shaming. In front of me, you can’t’. She went ahead to say that if Vasay Chaudhary and Ahmed Ali Butt are friends, they can have a laugh over it but not publicly since people pick these things.

Who would be responsible then? Mehwish Hayat asked. To which the host defended himself by saying that Ahmed is doing this and this was the joke.

After the news was made into headlines, Mehwish Hayat shared her views on the Instagram story too, saying ‘I hope everyone understands this and follows through. It’s about time we become more aware of our responsibilities and act accordingly.

The actor Ahmed Ali Butt was too quick to respond to it and shared numerous stories on his social media account. In fact, he put up quite hilarious stories. Additionally, the actor also responded sarcastically, saying ‘Whatever happened was quite an unfortunate event and was really bad. I will file a First Information Report (FIR) against Vasay. This has to stop. This cannot go on. And thank you Mehwish for having my back and I feel much safer and protected knowing that I have a strong woman who has my back.

With the world becoming more sensitive and empathetic, it’s high time we consider our words and actions towards sensitive topics, including body shaming. You aren’t aware of someone’s struggle, therefore you should be mindful with you words. Cheap humor at cost of someone’s mental health should be discouraged, specially if done publicly.