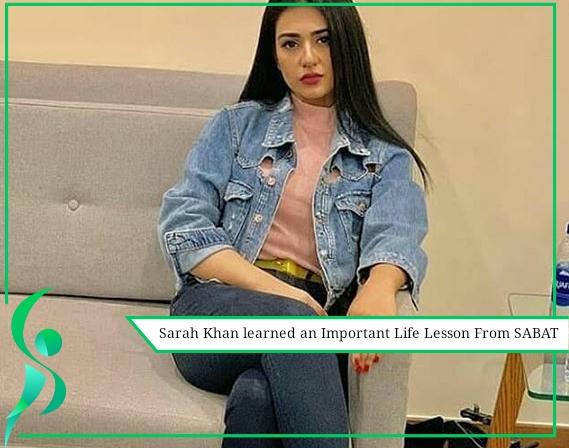 SABAT is a Pakistani Television series produced by Momina Duraid and directed by Shahzad Kashmir. SABAT has won the hearts of Pakistanis with its amazing storyline and strong feminine characters, MIRAL and ANAYA, which were played by SARAH KHAN and MAWRA HOCCANE, respectively. This incredible drama serial, SABAT, was aired on television screens on March 29, 2020, and finished recently on October 25, 2020. The one arrogant yet strong feminine character in SABAT which leaves its marks on our hearts, as the character of MIRAL, is truly unforgettable.

This character of Miral was played by Sarah Khan, an unproblematic, beautiful young soul, and is loved by all Pakistanis due to her pleasant personality and always smiling face. Sarah Khan is in Pakistani showbiz since 2012 and obviously she doesn’t need any introduction. Sarah Khan has been in many Pakistani dramas as positive lead character like deewar-e-shab and Mery Humdum, but this was the first time she acted as arrogant controlling women of elite class. This negatively strong feminine character of Sarah’s shocked the Pakistanis and grab the attention of public in just the starting episodes of the drama. You can see the public praising her villainous role in the following tweets,

Although she has us shocked by her acting in SABAT, the actor herself claimed that this drama serial SABAT has taught her an important life lesson. In an interview with the HUM News, Subha Sey Agey, Sarah said that the SABAT has shown her an important perspective of life. Sarah also praised the character of Anaya that how she uses the power in positive way;

“Miral used her powers in a negative way, while Anaya did that in a positive way. So, I’ve learned how we can use our powers to come to a certain conclusion.“

Talking about the drama serial, SABAT, more she also said something very beautiful which I personally liked very much and you can see that in the video of interview below,

“Miral has taught me a very important lesson, that we also tried to convey to the audience, that every person possesses a certain power. Especially in this drama, every character is very powerful- like Miral, Anaya, Ameer, and Usman.”

Sarah khan is a powerful actress and after the drama serial Sabat, Pakistanis now are expecting much more from her. Although she just got married with Pakistani singer FALAK SHABIR she might take a break from showbiz for sometime, but let see what she and directors of Pakistani showbiz has stored in for us. What do you think about Sarah Khan’s character in SABAT? tell us in the comment section below.