Home Celebrities The Pakistani celebrity wedding roundup of the year 2020 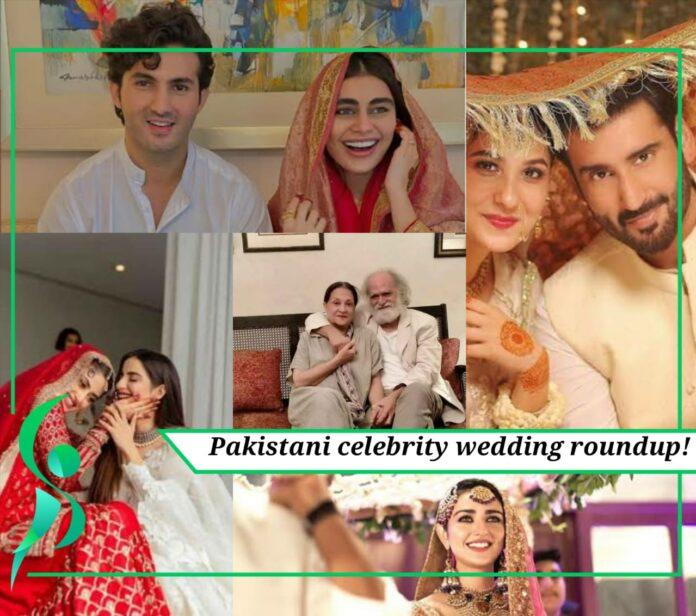 Can you guess the actor and actress who made it to our Pakistani celebrity wedding roundup?

When 2020 started, many of us had plans, which went down the drain, thanks to the pandemic! As the world struggles to cope with it, 2020 was also a year of happiness and love for many. Especially, when it comes to celebrities who tied the knot during the year.

Here is a rundown of our favorite celebrities, who exchange vows amidst the pandemic. The list includes:

Ahad Raza Mir and Sajal Aly: The much-loved couple were engaged on July 7, 2019, but tied the knot this year in March. This celebrity wedding was held in Abu Dhabi, in the presence of close friends and family. The celebration was simple, and Sajal kept her look old school on the big day.

Manzar Sehbai and Samina Ahmed: At 70, the two decided to take the leap together, and tied the knot in April 2020. The couple kept it simple and sober, seen in their pictures.

Umair Jaiswal and Sana Javed: After years of speculations, Sana Javed and Umair Jaiswal decided to go for nuptials this year in October. Sana opted for peach Bunto Kazmi ensemble, while Umair served good looks in a white shalwar kameez. Additionally, the news was broke by the duo on their social media accounts.

Shahroz Subzawari and Sadaf Kanwal: This Pakistani celebrity wedding was the most controversial, which came as a shock to many. The rumors were doing the rounds, since the last year, but were denied now and again. After the heartbreaking divorce of Syra and Shahroz in Feb 2020, the couple got married this year in May.

Sohain Shamshad and Rabab Hashim: The Pakistani starlet tied the knot in an intimate ceremony, due to the ongoing pandemic. The events were kept private. However, the pictures certainly made it to the internet. And, Hashim was applauded for her look on the big day.

These Pakistani celebrity wedding, definitely took the internet by storm. And, we can be happier for them. Here is wishing them a lifetime of happiness and love!

These Pakistani celebrity wedding, made it our list. Which one is your favorite among these? Tell us in the comments below.