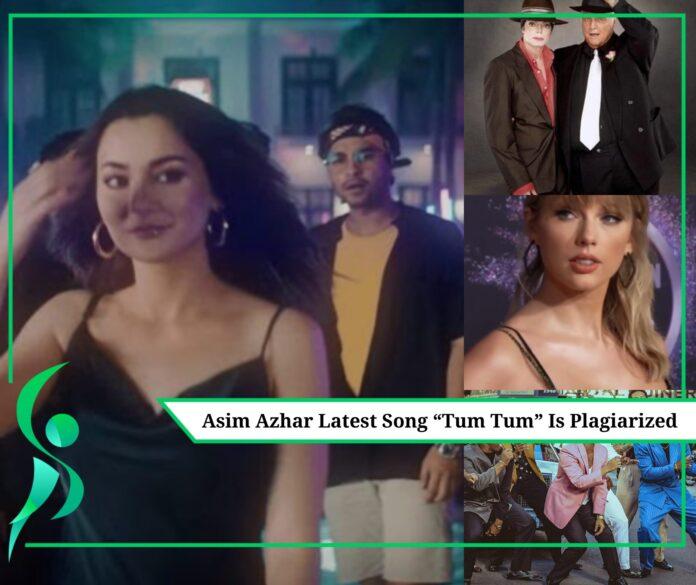 Asim Azhar recent song “Tum Tum” has just released featuring Young Stunners, Areeka Haq, Hania Amir, Moroo, and many more talented stars that it feels like we are watching a star-studded song. But as usual audience being audience they didn’t like his song as well and it receives a lot of criticism yet it has gained a lot of views as well. The song “Tum tum” has reached 1 million views within 1 week which itself is a great big news.

But now apart from criticism which it received we found the similarities between Asim Azhar’s new song and some of the international singers songs. Not the whole song but we found few of the scenes or moments in the songs which seems like it is copied from the following songs.

Asim Azhar Songs Is Plagiarized From:

“Tum tum” is plagiarized from the following songs which are:

Mark Ronson featuring Bruno Mars song Uptown Funk was released 5 years ago and currently it has 3.8 Billion views on YouTube as it is one of the most famous and loved songs. Now coming to the plagiarized content, what we found similarities is the starting of both the songs. As in the beginning of Uptown Funk, the girl is walking in the street and the gang (including singer Bruno Mars and his friends) are stalking the girl and starts dancing to the beat now the same is happening in ” Tum Tum” as well. Song starts with Hania Amir walking off the car and Asim Azhar with Young Stunners watches her and starts dancing after that.

Taylor Swift’s Blank Space & Look What You Made Me Do:

The other similarity is between “Tum Tum” and “Blank Space, in that scene Areeka Haq is arguing is alike of Taylor swift Arguing with the man.

Michael Jackson’s You Rock My World:

Here listen to the song of Michael Jackson’s You Rock My World:

These are few of the similarities between some of the songs we found. Do you find them exact same? If you did then do tell us in the comment section