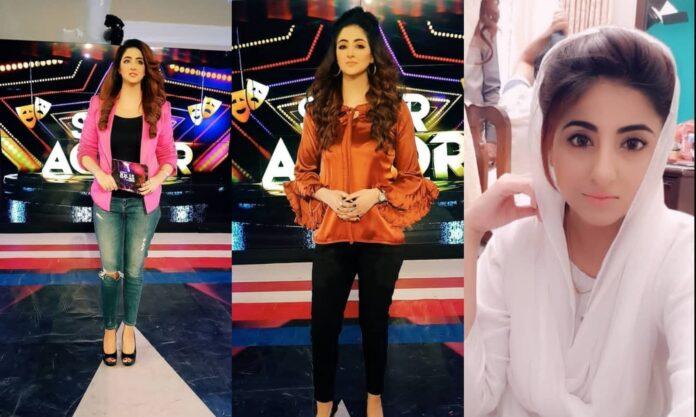 Pretty Bol TV host Fatima Sohail, who fight a lot of battles alone strongly for her son against his ex-husband and from your society. She is a survivor that gives courage to other women too. She is hosting a show and also currently working on an upcoming project “Mera Dil mere Dushman” that will air on ARY Digital.

She is working on her first project for the experience or understanding of how to work in dramas, she is inspired by Mahira Kahn and Saba Qamar.

In an interview with Fatima Sohail, we asked her some fun questions and she revealed a lot of facts about her.

SP: What you wanted to be as a kid?

FS: then I wanted to be a model, walking on a ramp attracts me.

SP: What is the most interesting thing about you that people don’t know?

FS: I don’t know is it an interesting or bad habit that when someone wronged me I can forgive them easily. And I’m an emotional and loving woman.

FS: on a serious note I think the useless talent I have is that I trust easily.

SP: tell us about your most embarrassing childhood memory?

FB: I lost while chasing a corn seller and my nana found me from fuji house sleeping on their couch.

SP: Have you ever get a compliment that actually sounds like an insult?

FS: ‘ You have a slim long nose” that’s what people tell me. I think I got lil bit long nose, and they are taunting me.

SP: what amount of greediness is in you?

FS: umm, greediness. I only wanted a loyal person and nothing.

SP: What is the worst prank you did with your siblings?

FS: I put horror alarm tune on my brother’s alarm when it ringed it scared him a lot.

SP: Spend 24 hours with the person you hate the most or you have to take a walk-in public wearing flashy turban over a three-piece suit? Choose one.

FS: Interesting, I’ll choose the former one. I like daring things, I will see what it feels like with the enemy.

SP: If you were told that it’s last day if your life, what would be your reaction?

FS: I’ll just worry about my son, May Allah give me life so I can take care of him.

SP: If you want superpowers what would it be?

SP: if you were a flower what would it be?

SP: What celebrity you would rate as perfect 10?

SP: Are you a sleepwalker?

SP: Movie you hate the most?

SP: What would you do if you were a boy?

SP: What would be a good theme song for your life?

SP: If you could choose one song to play every time you walked into a room for the rest of life, what would it be?

In summing-up, we enjoyed the Lil chat with the kindhearted lady.