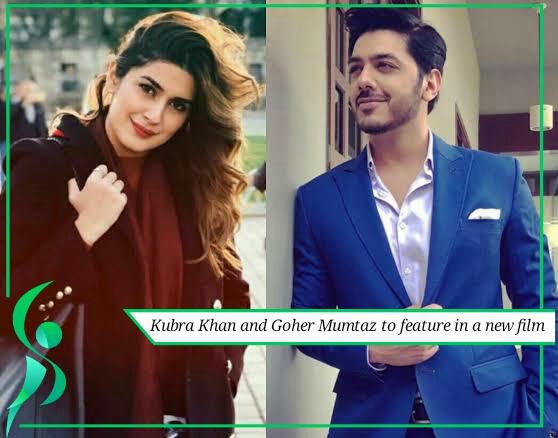 Two megastars of the entertainment industry, Kubra Khan and Gohar Mumtaz are set to star together in a film titled “Abhee”

Kubra Khan is known throughout the country for her stellar performances in numerous hit dramas including
“Sang e Mar Mar” “Alif” and much more.

Kubra Khan was last seen in the critically acclaimed drama “Alif” and has since taken a hiatus from new projects.

Although selected to play the a pivotal role in the drama “Mushk”, Kubra was not seen to have signed any new projects.

The film “Abhee” would be Kubra’s first project after her break and is wriiten by Goher Mumtaz.

The film is written by Goher Mumtaz and features a strong ensemble of Asif Raza Mir, Yasra Rizvi, Hina Bayat, Saleem Sheikh, Usman Peerzada, Mehmood Aslam, and Mohammad Ehteshamuddin and is slated for a 2021 release.

The filmed is slated to be a romantic thriller and boasts the depiction of a less ventured genre along with attracting the attention of cinema lovers.

This is Kubra Khan’s first film in this category and she is also expected to collaborate with Goher Mumtaz as a vocalist for one of the sound track of the film.

The film also comprises of music that is composed by Goher Mumtaz and has bagged stars like Rahat Fateh Ali Khan and Aima Baig to grace the film’s soundtrack.

We are excited to see this collaboration and hope that it entertains the audience.
For news and trends, follow.