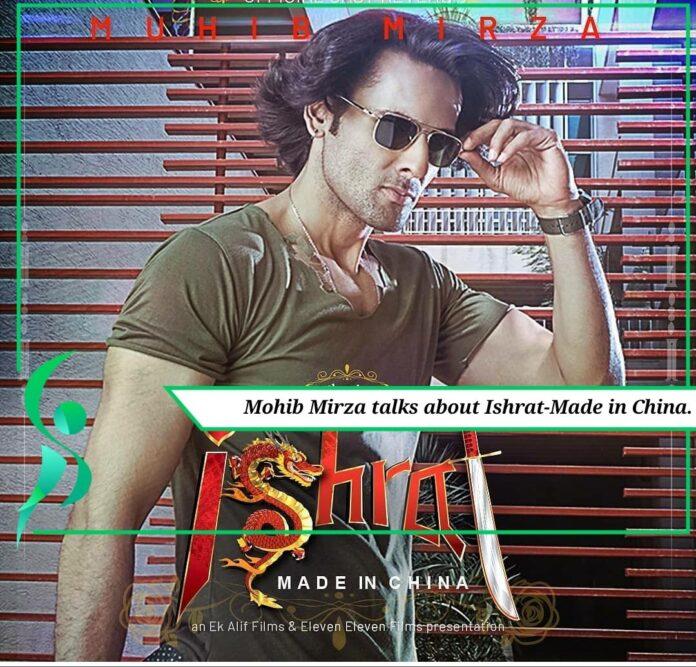 The actor and director of the film Mohib Mirza talk about the genre, characters, etc of his upcoming film titled Ishrat- Made in China.

In a recent interview, Mirza revealed that the film is based on cult-classic television show Ishrat Baaji, streamed in the year 2006. The original show was broadcasted by Aag TV, was a very demonstrative series. It was not plot-driven but character-driven.

Talking further about the film, Mirza stated that it will a breathe of fresh air for the cinema. The over the top performances, the fourth-wall-breaking is not going anywhere, Mirza assured. Fans of the original series will surely not be disappointed.

The genre of the film is action-comedy furthermore it does not contain lewd jokes, vulgarity, and dark humor which were included in previous releases.
Mirza emphasizes that his prime focus is to chronicle the journey of a character that is relatable to the youth of the present day.

The actor is enthusiastic to deliver a film in which he hopes that the audience’s time will be well spent. Due to COVID-19 no release date is announced. Mirza stated that he is not competing with any of the films. He wants people to have a good laugh with their entire family.

If Mohib Mirza manages to deliver a clean, family comedy film, that is going to be a novelty in itself and the Pakistani entertainment industry. The cast reveal of the film was appraised and looks like they have pictured a role out of their comfort zone.

Mohib Mirza is currently the talk of the town for his acclaimed performance in drama Dushman e Jaan, aired on ARY.

We wish him all the best for his upcoming film and hope that it made big once it hit the silver screen.