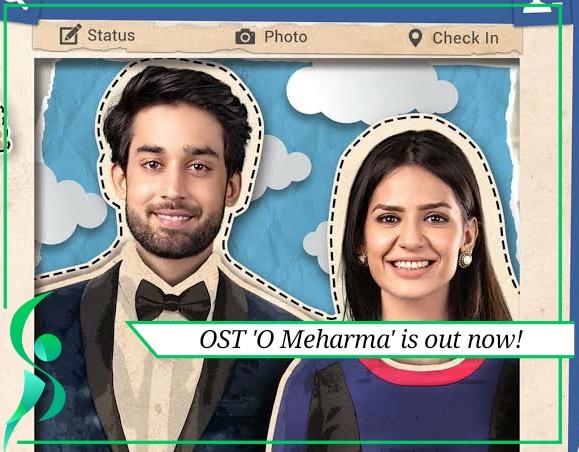 The OST of Ek jhooti love story “O Mehrma” is out and public cannot stop themselves from speaking about it. This beautiful song is sung by Zenab Fatimah Sultan and Mustehsan Khan. “O Mehrma” OST of Ek jhooti love story is composed by saad sultan and lyrics are written by shakeel sohail. This OST is full of love and entertainment just like the series itself and already in the public’s favourite list.

Ek jhooti love story is an upcoming series based on the novel of famous writer Umara Ahmed and the direction is provided by Mehreen Jabbar. The coordination of these two also provided us with a block buster drama serial Zindagi Gulzar Hai in the past. Ek jhooti love story feature Bilal Abbas as a lead role and Madiha Imam as costar.

This amazing webseries also features Kinza Razzak, Fawad Khan, Beo Zafar, Kiran Haq and Mohammad Ahmad. The cast is enthrilled and impatiently waiting for the release of web series on 30th of October 2020.

From trailer and OST of Ek Jhooti Love Story it seems that plot revolves around a middle-class boy ( acted by Bilal Abbas) and a middle-class girl ( acted by Madiha Imam) who fall in love with each other on internet and the most amazing part of this love story is that they used fake profiles to impress each other during whole scenario.Talking about it more it seems that it is not just a typical love story but also shows the struggles of middle class people living in our societies with high dreams. In this recently released OST of Ek jhooti love story and trailer it is obvious that the webseries has been shooted in Karachi and is a pefrect description of middle class karachities struggling with their daily life and high class dreams at same time.

From viewr’s view, it seems that ‘Ahmed Zeb’ has fallen for ‘Kinza Razzak’, it is in reality Bilal Abbas and Madiha Imam changing their identities to impress the other person. The spice comes in the series when their families decide that they should marry each other. While Madiha’s character has two elder sisters (Mariam Saleem Nawaz, Kiran Haq), a brother (played by Furqan Qureshi) and eccentric parents (played by Beo Zafar and Mohammad Ahmed). Bilal Abbas’s side of the family consists of one younger sister (Srha Asgr) and a mother (Hina Bayat Khawaja) who want the best for him, like they want the best for her. Who gets to marry who, and what will happen when the real identities will be exposed, willl the love survives upon this reveleation or it willl die and we will left with gloomy endings, we have to wait till 30 October to find out this.