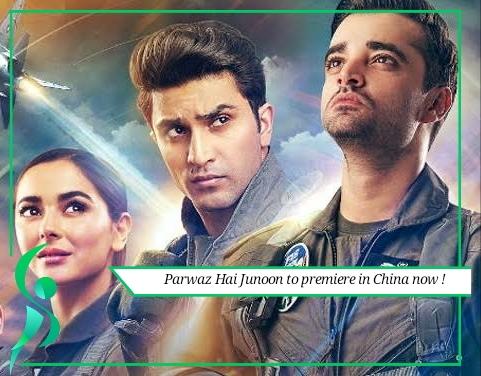 The film Parwaz Hai Junoon, released in 2018 is all set to stream in China now!

The Hamza Ali Abbasi starrer film is a tribute to Pakistan Air Force and its pilots, who risk their lives to protect the citizens of the country. Owing to its popularity, the film is now ready to hit in cinemas of China- marking the celebration of 70th anniversary concerning the establishment of diplomatic relations between the countries.

The aerial-combat war romantic film features Ahad Raza Mir, Hania Amir, Kubra Khan, Shaz Khan in lead roles. The main leads of the film were also quick to announce the historic moment with their fans. Additionally, they took social media to announce the ecstatic news, since it is the first film released after 40 years.

Parwaz Hai Junoon is dated to release on 13 Nov 2020 that is quite a historic achievement for the Pakistani entertainment industry. Haseeb Hassan directed the film produced under the banner of HUM TV.

From the desk of Showbiz Pakistan, we congratulate the cast and crew of the film for the historic achievement, making country proud.