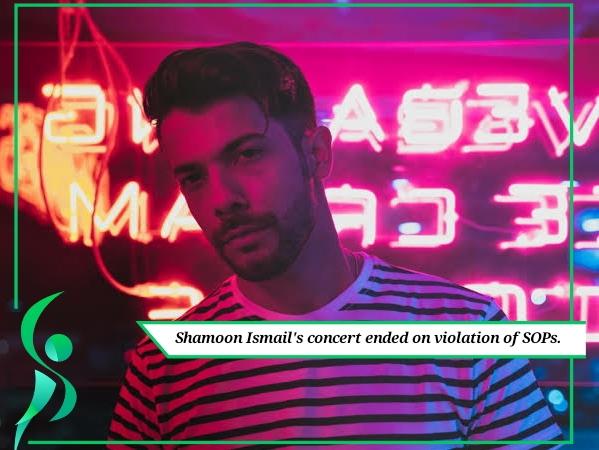 The popular singer Shamoon Ismail has to end his concert after officers took notice of violation of SOPs.

The ‘Rung’ singer was excited to be back on stage this weekend, scheduled at Avari Towers in Karachi. Ismail was welcomed by his enthusiastic fans, who grooved on their tracks until Karachi Police officials abruptly halted it.

According to sources, the concert was ended on the breach of SOPs issued by the Government. Talking to a leading newspaper, Shoaib Lari of Big Foot Music, who was playing bass alongside Shamoon Ismail, said, “We were already six tracks into the performance when we were told that we had been asked to stop the show.”

“The officials from the commissioner’s office had arrived at the venue and weren’t too pleased with how the audience was following the Covid-19 SOPs. We were told that due to the violation of SOPs, we have to end the concert. That is when the management told us to cut it off.”

“We got on stage around 8:15, after the DJ was done with his gig. Around 9 pm, we were asked to get off the stage and leave the premises. There were police, and all we could hear was band karain ji, isay band karain. So, we had no other choice but to end the night”.

The officials of Salt Arts hasn’t issued a statement, but Shamoon Ismail took his Instagram and shared his two cents on the matter. He wrote, “Unexpected end to a great night.”

Additionally, a fine of Rs 1 Lac has been imposed on the organizers, but it hasn’t been confirmed.