Home Interviews In An Exclusive Interview Of Sharmila Farooqi 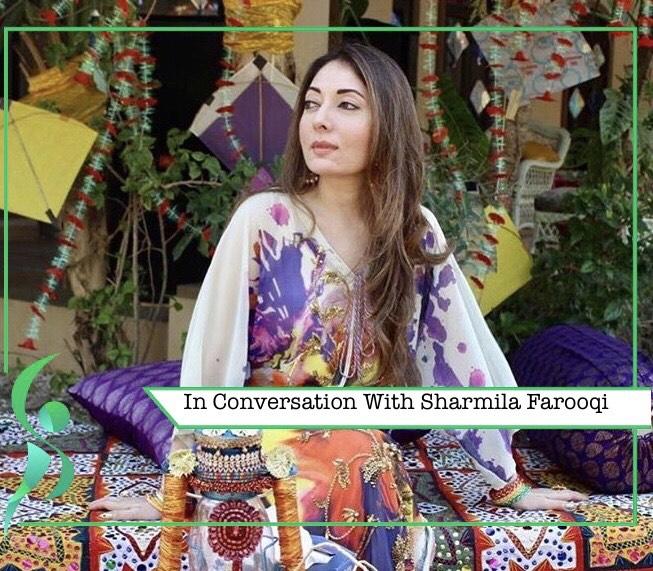 Sharmila Farooqi is a Pakistani politician based on Karachi. She supports Pakistan’s People’s Party (PPP) and she has served as an advisor of the Chief Minister of Sindh for 5 years (from 2008-2013). Sharmila Farooqi is well known for her daily appearance on the talk shows and not just that but for her decent personality as well. She belongs from a strong political family and that’s why her supporters praise her even more. She has also done a drama called “Panchwa Panchi.” The politician is now married and has a son as well.

Since we got in touch with Sharmila Farooqi so, we asked her some interesting questions not just related to politics but the recent on-goings as well. It was such an honor taking an interview from the politician as she was really sweet and patient with us. Showbiz Pakistan really enjoyed and loved all of her answers and we hope you guys experience the same.

S.P: Which actor or actress from Pakistan industry do you like the most?

Sharmila Farooqi: I think out of my all time favorite actor would be Reema Khan for sure. I think she is really elegant, she has come a long way and she really carries herself so well with dignity, grace and groomed herself so well and was active in such difficult times when there was hardly any technology or the production wasn’t so good. but she managed and come out as stronger, better and prettier as ever. The other actress that I actually actually think is superb and not given the due that she actually deserves is Saba Qamar. I think she is fantastic, she is natural. She can probably carry off any role just fabulously.

In male she said:” In the males I think I haven’t seen very very or noticed many as such but not many are my favorites. I think Humayun Saeed still does great acting and i think he is well. I really enjoyed watching Adnan Siddique in “Merey Pass Tum Ho.” I think that was the best role of his life and the role suited him so well.

Sharmila Farooqi Thinks Our Local Talent Should Be Promoted On PTV

S.P: What is your take on Turkish cinemas coming to Pakistan?

Sharmila Farooqi: I have never been a fan of Turkish dub dramas. I mean, I haven’t really seen anyone of them and I haven’t actually seen Ertugrul but I feel that our Pakistani dramas are just so so good. they can compete with the best movies of the world and I enjoy watching Pakistani drama, so I’m not a fan of Ertugrul at all. Neither do I wish to watch it. I do wish to watch Pakistani drama some of them are very nice. So, I did catch up with a few of them. I did watch “Mere Pas Tum Ho” and “Sabaat”. I think i watched a couple of episodes of “Sabaat” and I wish to see most of them I wish to see the entire series.

S.P: Are you in favor of Ertugrul screening on PTV?

Sharmila Farooqi: I am not a big fan of Ertugrul niether do I wish to watch it. But you know showing it on PTV, I think our local talent Pakistani talent should be promoted on the national network specially on Pakistani television instead of the Turkish drama or other dubbed dramas.

No One can play shaheed Mohtarma Benazir Bhutto role in biopic

Sharmila Farooqi: I don’t think so anybody can play shaheed mohtarma Benazir Bhutto because the aura, the charisma, the towering personality that she had cannot be played by anyone else. So, I think rather than a movie being made on her I think someone should go ahead and make a documentary on her life and show the clips of her, her videos, her speeches. Different angles of a life as mother, daughter and leader all those things. So, I don’t think anybody can play her part or nobody can do justice to it.

S.P: Likely who do you want to see playing the role of Asif Ali Zardari as most of us feel like he had huge role in Benazir’s life?

Sharmila Farooqi: Asil Ali Zardari Sahab was a integral part of Shaheed Mohtarma Benazir Bhutto Sahiba’s life and he sacrificed a lot while being married to her he stayed in jail he was the one who was politically entangled and to pressurize her he was put in the jail and he suffered a lot. The children suffered a lot so I don’t think again anybody can really do the justice to playing the role of Asif ali Zardari Sahab.

She also prasied Asif Ali Zardari: And he has given this nation a lot he’s given this nation 18 amendment, he empowered the parliament is given a unanimous NFC ward and he’s the on who has actually promoted a lot of tolerance within the Pakistani people’s party.

Pakistan is growing amazingly on YouTube, so do you watch YouTube and if you do then who is your favorite YouTuber?

Sharmila Farooqi: Yes, YouTube has actually taken over our lives and there are being some really young YouTubers and some really amazing ones. I don’t normally get time to browse around the YouTube, but I do see a lot of talk shows that I have missed on YouTube.

S.P: Tiktok is one of the most trending apps in Pakistan yet it is getting banned in most of the countries what is your opinion on that?

Sharmila Farooqi: Tiktok is immensely popular. I do like watching some of the Tiktok videos that to you know come in my timeline. I don’t think it should be banned I don’t think anything should be banned Yes moderated, Of-course! Anything in extreme isn’t healthy it’s unhealthy. So, in moderation yes one should be allowed to do almost everything except things which are unknown. I think it is a good pass time. It’s fun to watch and it’s cute!

S.P: Pubg getting banned recently has sort of stopped e-sports in our country what is your opinion on it?

Sharmila Farooqi: As I said earlier, anything in moderation is good. PUBG was temporarily banned in Pakistan after the death of a 16 years old, people were getting suicidal, people were getting addictive and that’s not good. So, especially during this lock down pandemic COVID-19 situation. It’s very easy to get addicted to the wrong things so, that needs to be moderated. I really feel nothing should be actually banned. It’s the parents. it’s the people around you need to moderate if something is getting out of hands.

S.P: What are your 3 favorite songs?

Sharmila Farooqi: I have a lot of favorite songs but three songs that I keep going back to of-course, is “Mere Rashk e Qamar” by Rahat Fateh Ali Khan and I love some really old Pakistani songs which I have heard literally when I was a kid, my father would hear in the car. So, they are just like stay with me. So, one of them is “Bant Raha Tha Jab Khuda Saray Jahan Ki Naimatein”. You guys can Google it and see it’s a lovely song and the third one is “Booh e Baariyan” by Hadiqa Kiani and there’s one more “Pehly Tou Kbhi Kbhi gham Tha” by Raheem Shah. These are my all time favorite songs.

S.P: Tell us good and bad things about Talk shows?

For bad thing she added: The bad thing is it consumes a lot of time and sometimes you need to sit with people you really don’t want to even sit with or talk to them. So, but by and large, I think I’ve been a regular on TV shows so I kind o okay with it. I enjoy it at times and when I don’t do it I’ll probably miss it.

Politics Has Taught Sharmila Farooqi To Be Patient

S.P: Two best things that you have learned from politics?

Sharmila Farooqi: The two best things that I have probablly learned while in politics for the last almost 12 years is to be tolerant with yourself, with the people around you and to survive in the worst of the situations to deal with every situations with a lot of tolerance and with a lot of patience. So, i think it has taught me to be patient and tolerant and I think that is very very important in life to be sane.

It was such a good experience taking interview of Pakistan’s finest politician. We hope to get in conversation with Sharmila Farooqi again. Hope you guys like it as well!