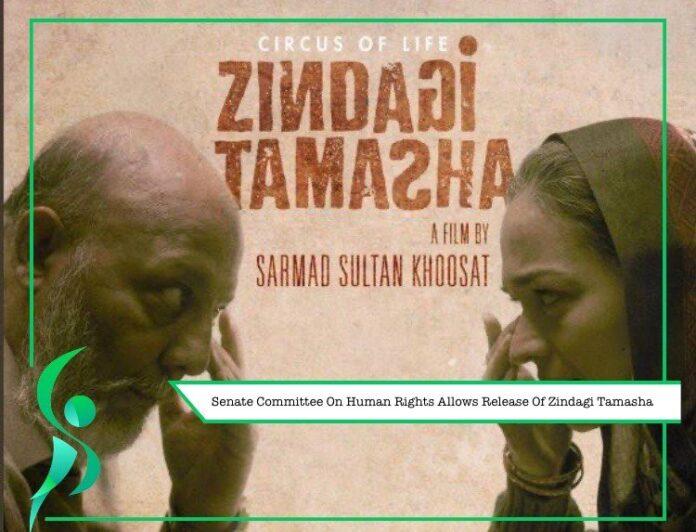 Senate Committee on Human rights demissed all the objection raised against the award-winning movie “Zindagi Tamasha” on Tuesday and allows the sensor board to release the movie all across the Pakistan after Corona. Chairmen of Panel Mustufa Nawaz Khokhar tweeted on twitter saying that the Senate HR committee does not found anything wrong in the movie “Zindagi Tamasha” and censor board has all the permission to release the movie. He tweeted:

Zindagi Tamasha was premiered at Busan International Film Festival and was all set to hit the screens of Pakistan in January 2020 but the Pakistani party “Tahreek-e-Labaik” called the movie Zindagi Tamasha as a sign of profanity and that they would hold a protest against it. Due to all these acts, the movie was delayed and handed over to the Council Of Islamic Ideology (CII) by the government despite it being allowed by the censor board twice.

Senate Committee On Human Rights Looked Over The Film:

After that the matter was taken over the Senate Committee on human rights as they asked for a copy of the movie from Central Board of Film Censors so that they could make a decision over the matter whether should it the movie be released or not. The chairmen of Senate Committee human rights also made sure that we would solely not allow the release of the movie in Pakistan if they will find any sort of promotion of blasphemy.

They stated referring to the party of “Tehreek-e-Labaik”: “We should not come under pressure of those parties who held Islamabad hostage twice”

And now in mid-July, they announced that they couldn’t find anything object-able or wrong in the movie after watching it a lot of members of their committee.
Here’s the trailer of award-winning movie Zindagi Tamasha in case if you want to watch it. It does seem like a promising one!

We hope we don’t find anything wrong in this movie and the senate committee on Human Rights took a fair step.