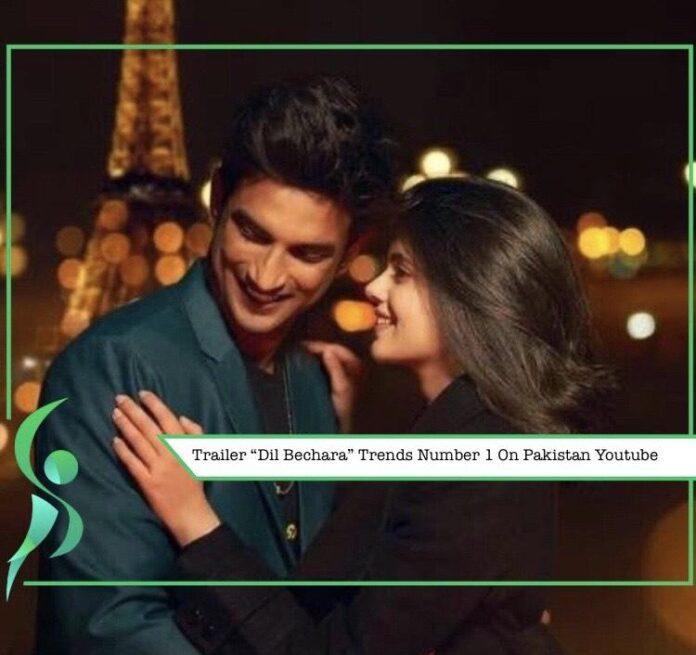 Trailer ”Dil Bechara” has just launched and its trending everywhere even on YouTube Pakistan. Sushant Singh Rajput’s death has left everyone utter shock and even though it’s been quite a time since his death people are still not forgetting the charmer. Investigations are still going on to find out the truth by Mumbai police and everyday new story comes out behind the suicide of the actor. Not just that his friends from the industry are continuously posting throwback pictures with sweetest captions ever.

Recently. Sushant Singh Rajput’s trailer of his last movie “Dil Bechara” which is the Hindi version of a very famous and super hit movie “The Fault in Our Stars” has just launched and the love it is receiving is insane. It somehow tells how much his fans miss and adores him. Not in India but the “Dil Bechara” trailer is trending number 1 on YouTube Pakistan as well. Which shows how much Pakistanis also adore him as much as Indians do.

The trailer has broken all the records, it is the first video on YouTube which has hit 1 million likes within 24 hours in the world and highest viewed trailer in India. The trailer has really awakened the suspense in the audience and everyone is looking forward to watching it as it is free from subscription.

This movie is going to be the last movie of Sushant Singh Rajput’s and it would be really difficult for most of his fans, friend and family to watch it. And it will be more emotional as predicted by the actual movie that the hero dies at the end.

Not just for us but his allegedly ex-girlfriend Kriti Sanon also wrote on her Instagram with the caption: “It’s gonna be really hard to watch this one.. but how can I not!!”

Well, we all are really looking forward to this movie, Are you?